TL;DR –  We made it to the top, made it down safely and got back home!

Any trip to the Himalaya often starts off in Kathmandu even if the ultimate destination is in Tibet and our trip was no different.

One year after the 8.1 earthquake, which also shut down our 2015 attempt, Kathmandu seems largely back to business as usual.  Unfortunately, much (all?) of the aid that flooded into Nepal after the earthquake is still largely tied up with government agencies.   Few of the poorest areas of Nepal have actually received much assistance in rebuilding their lives.  The human spirit is incredibly resilient and in spite of the lack of aid, many portions of Nepal have found means to rebuild or at least move on with life.

We were originally slated to leave for Lhasa on the 20th, but due to bad weather in Lhasa, we got stuck in Kathmandu for another night.  On the 21st, we were again delayed with weather in Lhasa but then told we were good to go.  As I wrote about in The Adventure Continues we had a pretty nasty flight which ultimately took us to central China and landed in Chengdu for the night. We were bused to a hotel about 40 minutes from the airport, which was connected to a much nicer casino/hotel that many of us were secretly hoping would be our evening destination.

After several reminders of who is control along with what we can/can’t take pictures of e.g. no pictures of the military, police or bridges, we started our journey into

basecamp. This year, we were able to skip the town of Tingri and make the push into basecamp in just two days.   It took a fair bit of cajoling with the CTMA (Chinese Tibetan Mountaineering Association) to convince them we’d be ok with making that kind of jump in altitude in such a short period of time.  In hindsight, maybe an extra day wouldn’t have been so bad…

On the 24th of April, we made it back into basecamp!   One of the most incredible parts of climbing Mt Everest from the north side is that you get to see the north face of the mountain, nearly the entire time.  On the south side, you don’t get the views of the summit until much further into the climb.  We were lucky to have visual motivation for nearly the entire 5 weeks of the climb.  How could you not be impressed, overwhelmed and humbled by that view?   We hadn’t even started climbing yet and were rewarded with that vista. 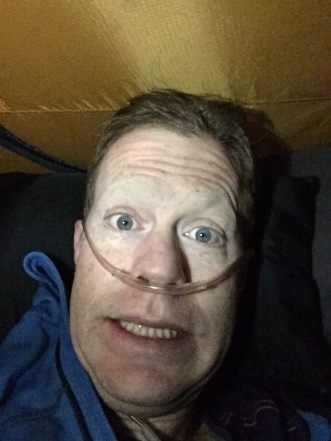 Already hitting the Os at basecamp

Unfortunately, a few days into our stay at basecamp, I had my first bout with AMS.  It also inspired me to talk about a bizarre phenomenon in the climbing world where people are cagey about their plans & details of their climbs.  In Opaqueness and transparency I shared my first scare with AMS and the amazingness of our expedition doctor – Monica Piris and her ability to quickly nip my issues in the bud.

Given her vast experience with treating climbers at high altitude, I was quickly reassured that while although it might be a little scary to be on dex & oxygen so early into the trip, that it really didn’t mean anything in the bigger picture of the climb.  It was one of the many reminders that going with a reputable, high-quality operator could quite literally be a life/death decision.

I’m still not sure if getting sick was a function of us spending two more days at a lower altitude (Kathmandu & Chengdu) than planned coupled with getting into basecamp in two days (as opposed to 3-4) or if this year was just an unlucky one for me.  Of course, at this point it really doesn’t matter given our success.  However, it would be nice to know for future trips to altitude and if there is anything I could do differently.

After a few days of settling in at EBC, we were on the move up to Advanced Basecamp, which sits at 6400meters/21,000ft.  With it being such a big jump both in terms of distance (~12 miles) and altitude (~4,000ft), the trek is often broken up into at least two days.  Some groups take as many as three or four days to make the journey, but given our rapid ascent program, we were on track to only do it in two.   Interim camp which is around 19,000ft is a place that you wouldn’t really want to spend more than 18hrs at.  It’s a relatively inconvenient campsite when it comes to getting water, or finding a smooth & level place to set up a tent. We strolled into Interim camp at 19,000ft relatively pain-free, which was awesome.  Fortunately and as always, our tents were ready to go and we were able to crawl in and rest a bit before dinner time.  I was psyched at dinner, mainly because I had an appetite and was ready to keep on eating whatever came my way.  That included a fire warmed can of peaches.  I felt bad because I ended up being the only person that enjoy the deliciousness which were the peaches with the rest going to waste.

Given that we felt good and took a few extra days at EBC, the next day we were off to finish the push up to ABC. 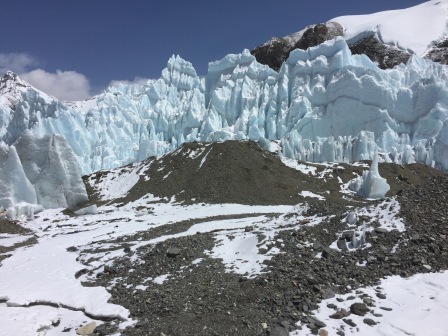 It must have been the altitude getting to me, but the push to ABC seemed rougher than expected.  Certainly more slow-going than the day prior.   What made the entry to ABC worse was that I was slow w/ altitude, bonking from lack of food that day and the tease of camp being spread out.  From the time you see the first tent on the outsk

irts of ABC, it’s still another 20 or so minutes until ending up a the Alpenglow Expeditions estate.  By this point, I was by myself and having never been to ABC yet this season, I had no clue where the hell I was really meant to go. I had a general direction but it sure seemed that camp was way further away than I was expecting or hoping for.  However, when I rolled in, those whom had been there for a few days were far more chipper than I and greeted me with hot mango juice – which was awesome!

Finally made to to Lhasa yesterday and today we are flying to Kathmandu.  Ready to get out!

ĆTomorrow we start our two day drive back to Lhasa where we’ll fly to Kathmandu!

We made the summit in 4hrs 45min, and then pushed all the way back down to ABC. In total, our day was 15hrs.  We were cruising!

More pictures and summit stories to come. We are headed down to EBC tomorrow for a rest day at a ‘low’ 17,000ft!