We’re here at base camp, finally! We got in around noon yesterday, in time for Sherke’s (the cook) all you can eat amazing meal. We are going to be spoiled when it comes to food, as there is absolutely no shortage of it here.

We spent the bulk of the afternoon just getting sorted out, arranging our ‘homes’ for the next several weeks. Each of us have 2-3 big bags in addition to the big bag we’d been trekking in. Now, we just need to find space for it in our luxurious three-man tents and put things in a location that will be somewhat readily accessible should we need it.

It’s weird. I’ve stared at countless pictures, Google Earth images, and read tons about Everest, but getting here and seeing Base Camp, the icefall and surrounding area has been quite surreal. The icefall is massive. It’s hard to imagine how big that thing is and until you actually see it first hand, it’s impossible to truly articulate the magnitude of that thing. We’ve already been watching people go up and down, which means the route is definitely in place. We’ve also heard that there may be fewer ladders than last year. We won’t know for certain until our climbing team starts up the mountain early next week to get Camp 1 and Camp 2 put in place.

The first night here at EBC was pretty nice, although it definitely gets cooler here than it has been on the trek in. I think Jon saw the temperature at 6º at some point throughout the night. Then, during the day, when the sun is on the tent it isn’t uncommon to get up to 80º or more. Pretty big swings in temperature here, which will just be the norm, although as the season goes on, it’ll likely just get warmer and warmer.

Today was our first formal rest day in 10 days. It was nice to not have to do anything all day long for once. For 10 solid days we were on at least one, if not two hikes. Good training for higher on the hill, that’s for sure. We’ll start doing day hikes out of basecamp in the next few days to get used to being even higher. Unlike a lot of other groups, Scott’s preference is to try to use adjacent peaks for acclimatization as opposed to going through that icefall a bunch of times. No argument here.

Well, it’s almost time for more chum, and dinner. Then, the subject of debate tonight will be what movie we pick to watch after dinner. 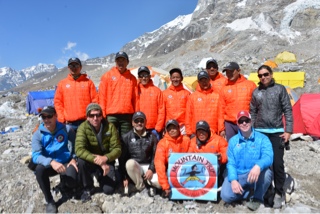 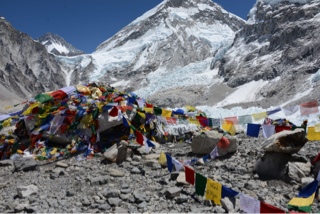 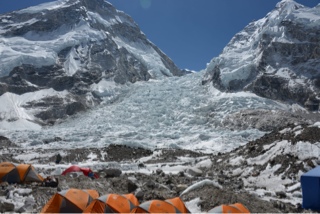 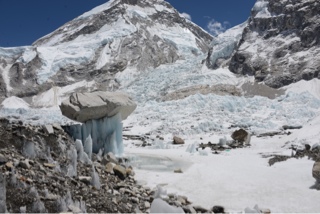 2 thoughts on “Everest Base Camp”