Yesterday we had our Puja, which is a Buddhist ceremony led by a Lama where the whole focus is on asking for safe travel and return on the mountain. It was about two hours long with three of our Sherpa, one of which being a Lama, reading from their prayer books. All the while, incense, Juniper branches and other items are smoking and ultimately, blessing all our gear.

One of the focal points of the Puja is to bless all of the gear we will climb with (crampons, ice axe, helmet and anything else we wanted in there) as well as to bless all of the climbers and sherpa to ask for safe travel and most importantly, safe return. They build up a shrine of granite rocks on top of which they’ll place several images of Buddha and other special deities. When the Puja is almost over, they raise a pole with prayer flags attached, and then strung across several hundred feet throughout camp. The belief is that every time a prayer flag flaps in the wind, a prayer is sent to heaven. Some people joke that the Sherpa people are lazy because they rely on the wind to send the countless prayers to heaven instead of doing it themselves. After watching these machines (aka Sherpa) work, I can tell you first hand that lazy is the last word I’d use to describe their ethos.

Under the shrine are plate upon plate of snacks, candies and breads as well as beer, rum & coca cola which are also blessed as part of the Puja. When all is said and done, naturally, you imbibe of the blessed food and drink. Disappointingly, I drank that one beer slower than I’d ever done so in my life. Something to do with the altitude, or so I’m telling myself. Not to mention, they made me have a bit of their boot-leg rum. At 17,500ft, it hits you like a brick. The rest of the Sherpa continued to drink what was left, and then started singing and dancing. Of course, Sherpa from other camps came over for the celebration to continue the good vibes.

Those machines got up and left camp about 2:30am this morning to start carrying loads up to Camp 1 (roughly 20,000ft) and onto Camp 2 (22,500ft-ish). Many were already back down to basecamp by about 1:30 today. In 11hrs they went to Camp2 and back… We’ll probably take 11hrs to get to C2, collectively, the first time. Very impressive.

While they were off doing real work, we went on a day hike up to Camp 1 on Pumori which put us about 19,000ft. That ledge, which I’d hate to sleep on, offered amazing views of the Lhotse face just before the clouds blew in and shrouded it from view. The cool thing, in addition to the view, was the fact that we got 3G from Gorak Shep up on that ridge. So, we checked email, sent out some updates and then headed back to basecamp, for yet another awesome lunch.

We’ve also learned of the tragedy that took place at the Boston marathon and we all send our condolences to those affected. 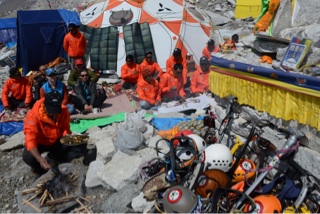 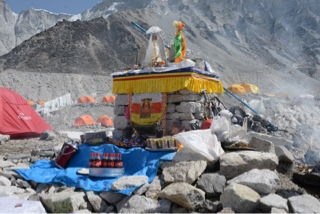 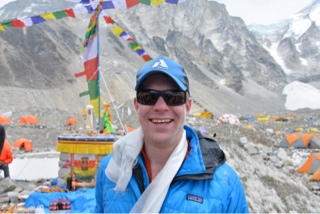 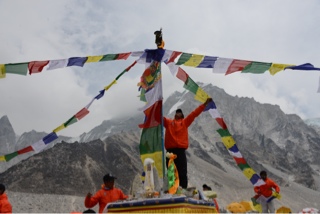