We moved up to Dingboche this morning, which puts us between 14,000-14,500ft. Definitely feeling the altitude, but also feeling better today.

Yesterday we moved from Namche Bazar up to Dobuche where we stayed at the lovely Paradise Lodge. Nothin quite like sleeping on a foam pad in a room built out of plywood. You can literally hear someone tying their shoes in the next room. Leaves very little to the imagination. Fortunately, when everyone is exhausted & adjusting to the altitude, the only things people are doing in their rooms are snoring & packing their bags for the next day.

Just before we got to where we’d be staying for the night, we stopped in Tangboche where we had a latté and a piece of apple pie while we were waiting for the monastery to open. John, Susan & Trudy decided to go up to the monastery anyway, and found a young monk who happened to have the keys to the joint, and ended up letting us all in, all by ourselves to check it out and get some history from him. Tashi, who is the young monk, has been studying there since he was 10yrs old. He was telling us that right now there are 35 monks that range from 10yrs old to 83 although all but four of them were away from town out teaching about the Buddha in the Khumbu valley. Very cool experience to get a personal tour with no one else in the monastery.

When we were walking out, we noticed an older (79yrs old) monk at the bottom of the steps. Although he didn’t speak English, he had an assistant there that did. When we told him what we were going to do, he offered a blessing by giving us a string necklace and some edible seed like things that are to give us longevity and long life. Definitely a powerful moment for the group, as we were not expecting it and it definitely sends good vibes up the hill for us!

Somewhere between Namche & Dobuche, I got food poisoning of some description. I’ve been bolting to the nearest “toilet,” which is often a hole cut in the floor with some leaves at the bottom, about 5-6 times a day. Great fun. Yesterday, as a result of my Himalayan quick-step, I had a real slow-going day. I pulled up the rear of the group all day, and was struggling to keep stepping forward. It sure takes it out of you. Literally and figuratively.

On the upside, I was feeling a bit better today, and at least got some of my energy back and we headed up to Dingboche where we’ll be staying for the next three nights while we further acclimatize. On our way up, we took a detour through Pangboche where we got to get a special blessing for our climb from the Lama Geshe. The whole process took about an hour where he chanted some prayers, blessed us with rice, water & string necklaces. He also gave us these little paper prayer flags that have been folded and have been tied together with multi-color string. Any time we are getting nervous, we just need to put that by our heart and we’ll be reassured. We also got another Kata (khada?) which is a silk scarf that is typically given along with a good luck wish & blessing. So far, I’ve collected four on the way in, but today’s was the most special so far.

En route I had a celebrity citing! I got to talk to and get my picture taken with Ueli Steck. He’s a total climbing badass. Last year he climbed Everest without Oxygen, and this year he’s working on a different route that they are keeping under wraps until they do it. He’s climbing with Simone Moro who is another Himalayan climbing hero. Ueli was also set a speed record for climbing the most difficult route on the Eiger (the north face) in something like 2hrs 57 minutes when the standard attempt by most climbers ranges 12+hrs or more. He’s dubbed the “Swiss Machine” given his prowess at high altitude. Look him up, impressive dude. Super nice too.

Then we headed out and up to Dingboche. When we arrived, Mingma whom owns the SnowLion lodge where we’ll be staying, greeted us with ginger & lemon tea plus a plate of french fries which were hands down the best I’ve had in recent memory. Maybe it was the altitude, maybe it was getting my appetite back, or maybe it was this special place, it’s hard to say. All I know is that I wolfed a bunch down. Tonight, we’re looking forward to roast chicken which apparently is quite infamous. Generally, on the trek in it’s advisable to be vegetarian and only eat cooked veggies. Deviating from that and you substantially increase your odds of getting something as awesome as what I’ve had. Apparently, though, eating the Yak steaks is almost a sure fire for getting deathly ill. I’ve talked to several folks that were put down for 24-48hrs and literally they did not think they were going to make it. With that, and as much as I like to eat weird stuff, I’ve steered clear of the Yak.

Everyone says hi to their families back home and hopes all is well.

Another day down, and another day closer to the hill. 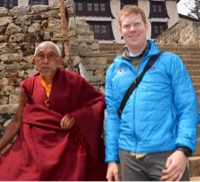 One thought on “Dingboche”